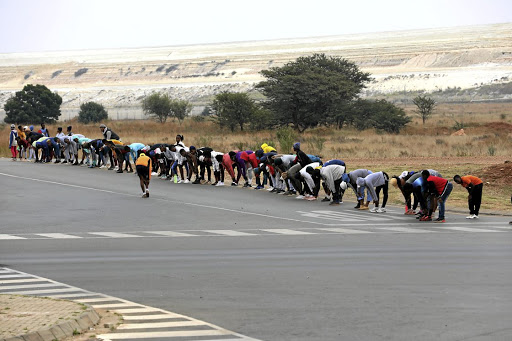 Impala Road, which connects various townships of Soweto, could easily be mistaken for the starting line of a marathon in the mornings because of the large number of people exercising in groups.

Businesses hit so hard by lockdown that some may not survive.

5 expert tips to help you nail your virtual job interview

Job interviews via video call are becoming more common than before. Land your dream job with these expert tips.

Africa thrills musician Tresor as its in his DNA

South African culinary culture will be in the spotlight as multi award-winning chef Zola Nene joins British celebrity chef Gordon Ramsay on the new season of his culinary adventure show, Gordon Ramsay: Uncharted. The season premieres on National Geographic on August 26 with Ramsay visiting Nene’s birth province of KwaZulu-Natal, where he gets up close with the province’s wild side, learns the secrets of the traditional cuisine of Zulu warriors and joins the local chef in the kitchen.

Natasha Thahane shares some of her top skincare tips with us.

Would you pay up to R1,600 to buy a carton of cigarettes on the black market?

'My first time doing my own box braids'

This past Sunday, World Baking Day was celebrated. And possibly for the first time in a long time, people have been really focused on baking. The national lockdown even resulted in the shortage of yeast.

Maboneng is seen as "the place of light" despite being buried in the deep dingy parts of cold Johannesburg.

Vilakazi Street in Soweto resembles some sort of a ghost town these days. The usually bustling neighbourhood and the gateway to tourism in the township is eerily silent.

Sculptor Mamud brings any subject to life through art

Sculptor Mamud Samamoude is an exceptional artist who manipulates any material to bring his subject to life.

RECIPE | How to easily brew up boozy apple cider

With a simple recipe, minimal equipment and a surplus of apples you can make a delicious sparkling apple cider that'll be ready to drink in a day or so.

Share your lockdown beauty routine videos, images and tips with us

With homeschooling having been thrust into the hands of unequipped parents due to the Covid-19 lockdown it's only natural that parents and learners feel anxious about learning from home.

While quitting smoking during lockdown hasn’t necessarily been a willing choice for Mzansi's smokers, it’s a reality that many are coming to grips with.

Mental health tips to help you cope during a stressful time

Burnt out and feeling down? Make your mental health a priority in 2020.

For those who remember, it doesn't seem that long ago when actor and producer Thapelo Mokoena led a trio of parched friends across a desert to get some refreshments for an alcohol advert.

WATCH | A discussion with primary and high school education professionals

Oh no! Do we really have to teach our own kids?

Sifiso Mathenjwa has been serving ice-cream in his neighbourhood in Daveyton on the East Rand since lockdown regulations were revised to level 4, allowing for food orders to be placed online for delivery.

Wearing a face mask whenever you step out the house is good for curbing the spread of Covid-19, but it might not be such good news for your skin — especially if you'll be wearing this mask for hours on end.

Thuli Mashaba and her son Siyabonga Malinda have a relationship like no other.

10 expenses to consider when having a baby

The decision to have your first baby can be both exciting and daunting. Here are some basic budget considerations for parents-to-be.

Nikiwe Dlova's hair styling is colourful, trendy and a lesson in history

Dlova dedicates her creativity to a curious mind during childhood.

Here's what SA is getting up to during the coronavirus lockdown

UNITED APART | Dancing, working out, camping & more in our May 1 lockdown highlights video

Dancing, working out, camping & more in our May 1 lockdown highlights video
Share this page:
Back to Top